Voices from The Waste Land 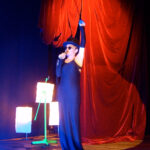 Description: PACTA. dei Teatri proposes a short video from "The Waste Land” by T.S. Eliot, a poem composed 100 years ago between December 1921 and January 1922. In the staging, directed and interpreted by Annig Raimondi, a leading role has the voice, which multiplies and depersonalizes itself, through the variation of registers and tones, and underlines the condition of modern human, who tries to overcome the loss of his centrality, taking on different voices.

City/place: Milan Venue address: The video will be available on our YouTube channel (PACTAdeiTeatri SALONE) and shared on our FB page: https://www.facebook.com/pactasaloneviadini/ PACTA Salone address: via Ulisse Dini 7, 20142 Milan