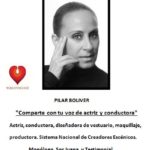 Performer/s: Pilar Boliver actress, dress designer, make-up designer, producer, conductor. She has been directed by the most important theatre directors in Mexico, and she won several prizes from the most important prizes for actresses in Mexico. She has also a broad characterization in 90 performances as dress designer. She is conductor and cultural analyst in TV Cultural program for pop culture since 2000.