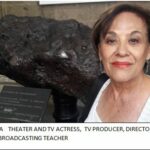 Description: Explanation about the female voice in theater, television and as a theater director or musical producer. Part of female monolog the woman soldier.

Performer/s: Martha Zavaleta is a great actress , musical and theater producer and director She studied Spanish Literature and Theater in the National Autonomous University of Mexico .She has been in University theater where she won international and national awards in Nancy (France) Warsaw and Reimss. She worked in the production and direction of several television series and special musical projects .She has founded capacitation centers in Televisa and Tv Azteca, two important television companies in Mexico. She made several research projects for cultural programs in television.